In February, three high school girls filed a court case challenging a decision allowing transgender athletes to compete in women’s sports in Connecticut. The Alliance Defending Freedom (ADF), representing the girls, argued that the policy denies them the protection of opportunity granted to women under Title IX of the Civil Rights Act. At a press conference, one high school senior said, “All we’re asking for is a fair chance.”

On Monday, the judge who was assigned the case, Robert Chatigny, was asked by the girls’ attorneys to step down on the basis of impartiality. He had previously ordered them to refer to the athletes as “transgender females” instead of “males.”

The Department of Justice has recently taken interest in the court case. said

“…we generally try to accommodate how individuals desire to live their lives — up to the point where those desires impinge on the other people’s rights. Allowing biological males to compete in all-female sports deprives women of the opportunity to participate fully and fairly in sports and is fundamentally unfair to female athletes.”

Conservatives believe that a policy which enables a transgender athlete to compete in a women’s sporting event allows him to “cheat at sports at the expense of his female competitors.” The playing field is anything but level they say. Victoria Hood, a former cycling champion, noted that scientifically, biological males have a physical advantage even after sex-reassignment surgery or hormone-therapy.

Group that released Kentucky gov race ad about transgender athletes in women's sports – Campaign for American Principles – has put out another one. The first was about track, this one's about wrestling.

"If [Democrat] Andy Beshear gets his way, there won’t be any rules." pic.twitter.com/uDGfuR3Faw

Under the Obama administration, the Education Department instructed schools to “treat a student’s gender identity as the student’s sex for purposes of Title IX and its implementing regulations.” The guidance has since been overturned but not replaced by the Trump administration. In the current case, the Connecticut Interscholastic Athletic Conference (CIAC) said their policy is in accordance with state law, as well as the federal Title IX law. Lawyers representing the transgender athletes argued that the lawsuit challenges their clients’ “right to equal educational opportunities.“ The Left has referred to the ADF as a “hate group” and believes their attempt to misgender the athletes is dehumanizing. 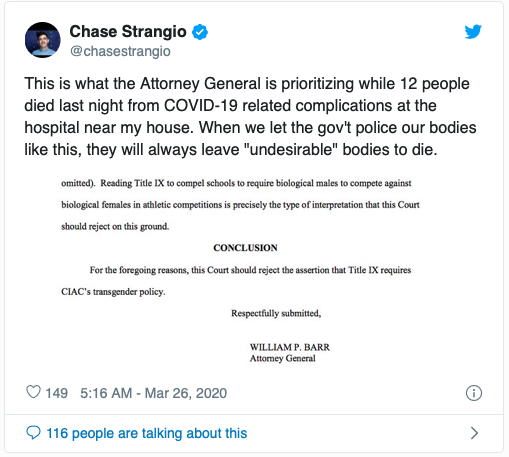 FACTS While many places are tightening up on Covid restrictions – including LA Country closing ...

The Conservatorship of Britney Spears

FACTS The court battle continues between Britney Spears and her father, Jamie Spears, who ...

FACTS Lawmakers in California have proposed a new piece of legislation, AB-2826, which aims ...

New Requirements at the Academy Awards